Although simple, it is very powerful and I believe I write better code since I started using it as often as I can.

How it all begun?

I remember learning redux a few years ago. It was the first time I heard the term “pure function”. I was hooked immediately. It all made perfect sense… Composition, immutability, pure functions, it all looked so elegant and just…right.

I started learning more functional programming principals and tried to use them as much as I could in the code I write for my job. It turned out to be more challenging than I thought, as not all functional techniques are immediately “readable” the first time you encounter them.

In addition, working in a large team, where not everybody is as excited about functional programming as I am, is limiting in that regard.

Having said that, the most basic principle of functional programming is quite easy to implement and can be understood by everybody.

By using a specific structure sometimes called “the functional sandwich”, we can enjoy its benefits and make our code even more readable.

So let’s see how to make a functional sandwich.

Pure functions are the fundamental building block of functional programming. They are regular functions, adhering to 3 constraints:

To better understand, let’s see a simple example of functions breaking the rules above.

Each of the first 3 functions violates one of the restrictions listed above, making them all impure.

The first function dayOfWeek, will return a different value every day, thus violating the first rule “always return the same output for the same given input”.

The second, isLanguageSupported, depends on the contents of the languages array. This array was initialized outside the scope of the function and was not given to it as an input, thus this function violates the second rule “depend only on explicit inputs”.

getUserData is the worst offender, violating the third rule not once, but twice! It performs 2 kinds of side effects:

The last function, main, is automatically ruled out since it’s calling impure functions.

On the other hand, let’s look at this code:

Every function here is pure, as they all follow the rules above.

It’s much less verbose, everything is very predictable and very easy to compose as demonstrated by the last function getUsersNames.

The benefits of pure functions

What do we gain by writing pure functions? Isn’t just using side effects and accessing global variables easier and gets the job done anyway?

We mentioned some of the advantages by the end of the last section, but let’s consider the full list of benefits of writing pure functions:

Considering the above list, suddenly the restrictions on pure functions seem very cost-effective.

So just make all your functions pure and profit, right?

Those pesky side effects

While this is nice in theory, real-world applications require you to use side effects and keep a mutable state. So what’s the point in writing pure functions in an impure world?

While side effects are unavoidable, by writing more pure functions, larger parts of our app can enjoy these benefits.

So how do we write more pure functions?

Let’s refactor the example from code snippet #1 by splitting it around side effects:

Code snippet #3 — splitting around side effects

We start by moving all the impure parts to the main function, the entry point for our code. We modify functions to accept more inputs where needed, to avoid breaking the second rule (inputs must be explicit).

This means getUserData is not needed anymore, since all it did was fetching data and mutating state. In larger apps we might still split impure code to reduce responsibilities and make our code more readable. In this case it is not necessary.

On the other hand, the composition of the appState can be expressed in a pure manner, so the second thing we did is extract it to a pure function named updateAppState and call it from main.

Now the business logic of our app is broken into small, composable parts, which can be easily tested. Also, the only place mutating the appState is the main function, so it will make our life easier as we know nothing else influence or can be influenced by the global appState.

By splitting the code around side effects and creating more pure functions, the code gets structured like a “functional sandwich”. Or as some might say, the code has an imperative shell and a functional core.

Pure functions will always be called and eventually return to an impure function. Covered from both sides by an imperative bread, like a tasty functional sandwich. 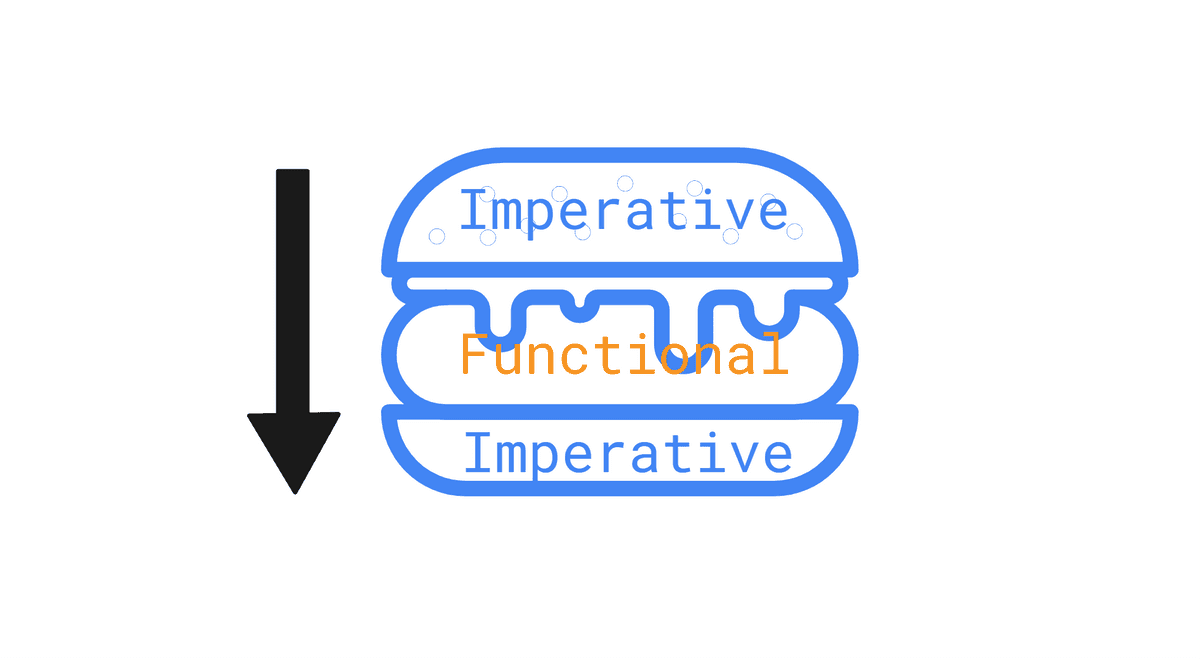 If you keep at it, all the side effects will eventually be pushed to the “edges” of the app. As part of the server’s API, or listening to a DOM event.

This is good practice, as it makes all the business logic very isolated, easy to test, and to reason about.

Functional programming is amazing! I highly encourage you to learn more about it. Though it might be intimidating at first, it is beautiful, mind-opening and there is quite a lot to learn from it to use in practice.

Recently I also gained more respect and insight towards object-oriented techniques, by researching their relation to functional programming, and how to implement some functional techniques in different languages.

Check these out, as they helped me a lot:

Thanks to Yonatan Kra for reviewing